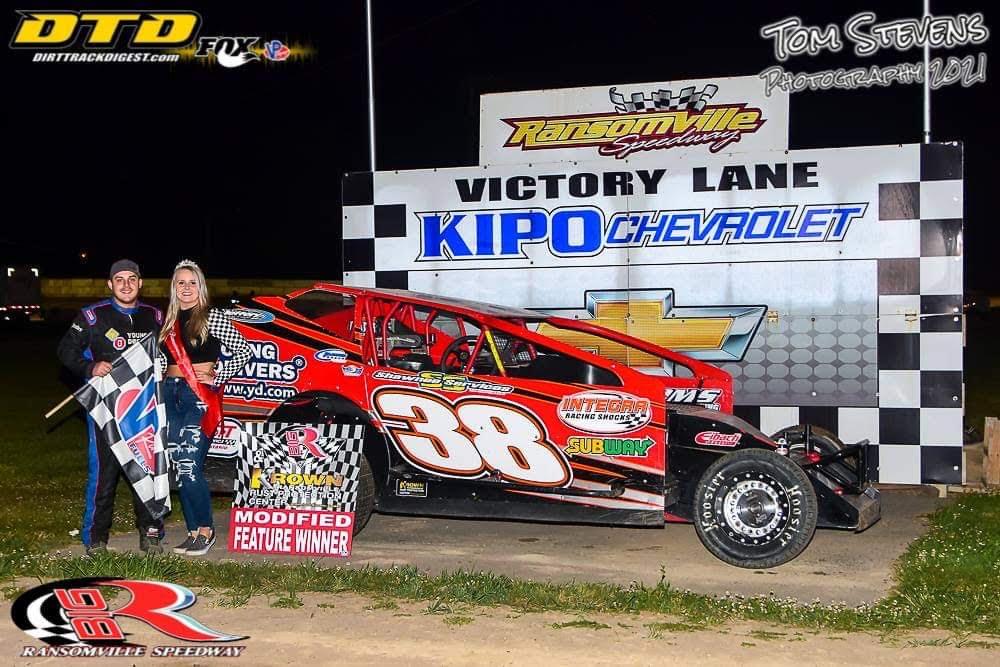 RANSOMVILLE, NY (July 2, 2021) Fireworks in the sky and tremendous racing on the track had fans on the edge of their seats Friday night at Ransomville Speedway as Hy-Tech Concrete, Hebeler Sales & Service, uBreakiFix, and Beyer Boys Trucking presented the racing action to kick-off the Independence Day weekend. “The Renegade” Ryan Susice from Ransomville, NY earned a hard-fought win in the Krown Undercoating Modifieds. Scott Kerwin from Newfane, NY won his third Investor’s Service Sportsman feature of the season. “Showtime” Jaren Israel from Wilson, NY won his fourth KiPo Chevrolet Street Stock feature of the season. Dante Mancuso from Batavia, NY won his third Sunflowers of Sanborn Mini Stock feature of the season. Sam Junkin from Marilla, NY picked up his third win of the season in the Kevin’s Carpet Cleaning Novice Sportsman.

“CB3” Chad Brachmann and third-generation driver Erick Rudolph were on the front row for the Krown Undercoating 358 Modified feature with Rudolph showing the way. Ryan Susice would take second away from Brachmann following a lap one restart and would start to go after Rudolph, with Brachmann, Greg Martin, and Jonathan Reid racing in the top five. Mat Williamson would battle with Reid and take over the fifth position on lap six and immediately go after Martin for fourth. Susice would catch and would challenge Rudolph for the lead, battling on the inside of the racetrack. Rudolph and Susice would pull away from Brachmann and Williamson, as they would battle for third place. “Money Mat” would take over third place on lap 14. The leaders would hit lap traffic and would go nearly four-wide and the two Ransomville drivers would continue their torrid battle for the lead. Rudolph and Susice battled for several laps, trading the lead on a couple of occasions. Susice would take over the lead for good with 10 laps remaining. While Susice and Rudolph contended with lap traffic, Mat Williamson would start to catch Rudolph for second place. Susice would go on to score his first Ransomville win of the season over Rudolph, Williamson, Brachmann, and Martin.

Scott Kerwin and Dylan Duhow brought the Investor’s Service Sportsman to the green flag for their 25-lap feature event with Kerwin showing the way. Brian Harris raced in third with Dave DiPietro and Brett Martin racing inside the top five. Brett Senek would pass DiPietro to enter the top five on lap five, as Kerwin and Duhow pulled away from the field. Martin, Harris, and Senek battled for several laps, as Senek would take over fourth from Harris on lap 11. Kerwin would hit lap traffic at the midway point of the race. Martin would close in on Duhow for second, just as Jessica Kriegisch and Zack Sam got together in turn two to bring out the first caution of the event on lap 16. Brett Senek would take over second off the restart and Derek Wagner would race his way into the top five after passing DiPietro and Harris. Kerwin would go on to win his third feature of the season over Senek, Martin, Duhow, and Zach George.

Sam Junkin and Robert Henning were on the front row for the Kevin’s Carpet Cleaning Novice Sportsman feature with Junkin showing the way. Jake Bansmer battled with Henning for second place for much of the event, as Junkin pulled away from the field. Junkin would go on to score his third win of the season. Henning, Bansmer, Ken Washburn, and Brandon Close would complete the top five.

Fans, drivers, and crews can listen to the racing action on 96.5 FM using their portable FM Radios.

On Friday, July 9, VandeMark Chemical and East Coast Speed present “The Ones That Left Us to Early 30” for the RUSH Crate Late Models, as well as the Richard Wilkinson Memorial. Joining the RUSH Late Models will be the Krown Undercoating Modifieds, KiPo Chevrolet Street Stocks, Sunflowers of Sanborn Mini Stocks, and the Kevin’s Carpet Cleaning Novice Sportsman. The July 9th program will be streamed live on www.dirttrackdigest.tv