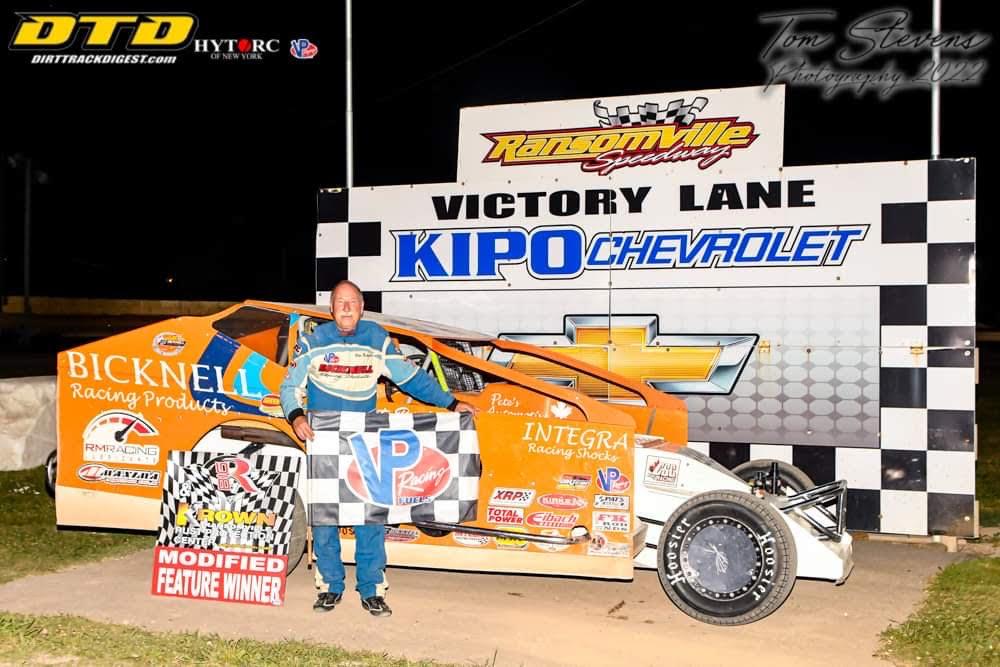 Pete Bicknell and Scott Kerwin brought the Krown Undercoating Modifieds to green for their 30-lap feature, with Bicknell showing the way. Steve Lewis Jr raced in third as Chad Brachmann would take over fourth from Allan Wills as Greg Martin raced on in fifth place. Kerwin would reel in Bicknell and the two veterans would battle for the lead. Brachmann would take third place away on lap 10 and on lap 16, would catch Kerwin and Bicknell. Brachmann would catch the wall in turn two, allowing Mat Williamson to catch and pass Brachmann on lap 20. Williamson and Kerwin would catch Kerwin for second place with seven laps remaining. Williamson would take the second position away, but it would be Bicknell racing to his second win of the season.

Greenley George and Jessica Kriegisch were on the front row for the Investors Service Sportsman feature, with Kriegisch showing the way. Noah Walker would take second away as Derek Wagner, Brett Senek raced behind. Derek Wagner would take the lead away on lap seven, and Senek would take over second on lap nine. Cody McPherson would take fourth away on lap ten, as Wagner, Senek, and Walker raced in the top three. McPherson and Walker battled for third for several laps as Wagner started to open up his lead. Wagner pulled away from the field to earn his fifth win of the season.

Ian Paul and Chris Leone were on the front row for the Sunflowers of Sanborn Mini Stocks feature, with Paul showing the way. Matt Hornquist would take second away from Leone on lap six, but Leone would regain the position just one lap later. The top six battled for much of the 15-lap affair. Paul would hang on for the win over Leone, with Cole Susice, Ryan Plante, Susice, and Curtis Rung. Paul would go on to score his first career feature win.

Abby Castile and Noah Mamo were on the front row in the Kevin’s Carpet Cleaning Novice Sportsman feature, with Mamo showing the way. Mamo would suffer suspension damage on lap three, bringing out the caution. Abby Castile would be scored as the leader on the ensuing restart. She would pull away as Dillon Adamczak and Aden Harris battled for second place. Colby Adamczak would pull into the infield on lap four and would bring out the caution. Abby would hold off the field to score her first career feature win.

The Ransomville Speedway will be back in action on Wednesday, August 24th as Stirling Lubricants, National Maintenance Contracting Corp, Wendt’s Propane, Lawns Unlimited, Evergreen Lawn & Tree Service, and Hebeler Sales & Service presents the 37th Summer Nationals for the Super DIRTcar Series Big Block Modifieds and the 2nd Mike Bonesky Memorial for the Sportsman Western and Central Region. The Summer Nationals will be shown on DIRTVision. Pits will open at 3 pm, grandstands open at 5 pm, and racing will start at 7:15 pm.

Then on Saturday, August 27, the Versus Monster Trucks will take center stage! Tickets are still available for the Monster Truck show by logging on to www.ransomvillespeedway.com