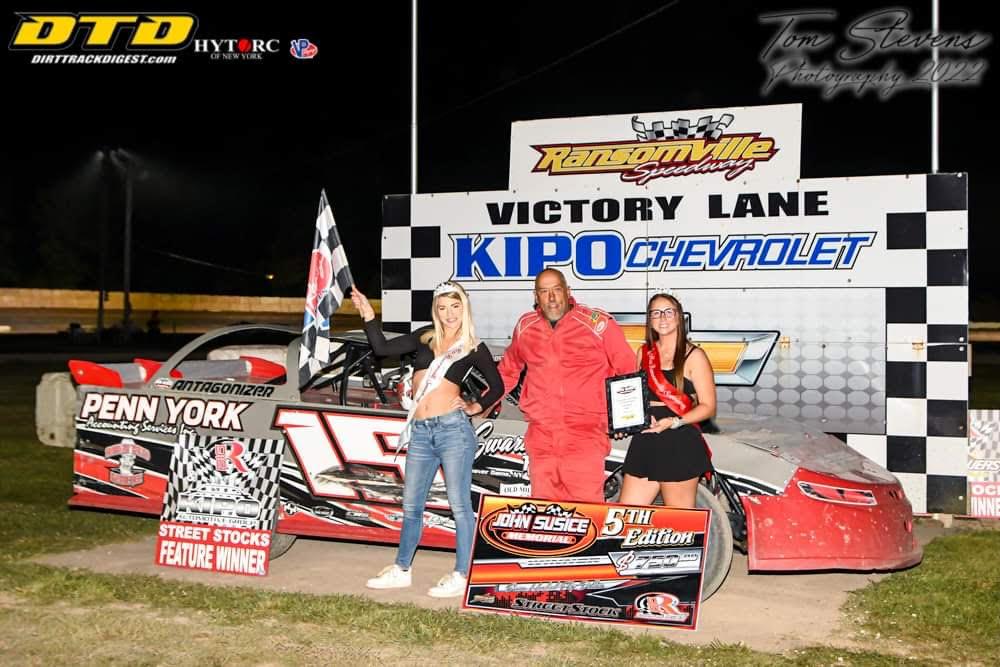 The 5th John Susice Memorial for the KiPo Motors Street Stocks was led to the green flag by John Zimmerman and Damian Long, with Zimmerman showing the way, ahead of Brandon Sherwood, Glenn Whritenour, Pete Stefanski, and Ken Camidge. Whritenour would take second away from Sherwood and would go after Zimmerman for the lead. The top two would pull away from the field, as Sherwood and Pangrazio would battle for third place. The caution would come out on lap 12 as Ken Camidge, Mike Fellows, and Chris Dziomba got together, in turn, one and race leader John Zimmerman would hit the wall. Zimmerman went pitside, giving the lead to Whritenour. The restart would see Whritenour, Sherwood, and Pangrazio take off in the top three spots, as Simon Bissell raced in fourth place. Mike Fellows spun in turn two to bring out the caution, and Josh Pangrazio hit the wall. On the restart, Whritenour would lead Sherwood and Bissell. Sherwood would close the gap on Whritenour, but Whritenour would go on to score the feature win.

Scott Kerwin and Pete Bicknell brought the Krown Undercoating Modifieds to green for their 30-lap feature, with Kerwin showing the way, with Bicknell holding off Steve Lewis Jr early on. Chad Brachmann, Mat Williamson, and Erick Rudolph would all get around Lewis to move into positions three through five respectively. Williamson and Brachmann would battle for third place for several laps, with Williamson moving in third place on lap 11, with Kerwin and Bicknell continuing to run first and second respectively. Williamson would reel in Bicknell for second place at the race’s halfway mark, with Williamson clearing Bicknell with 12 laps to go, and would go after Kerwin for the lead. Steve Lewis Jr’s strong run would end on lap 21, as he slowed in turn four. On the restart, Williamson would take the lead away from Kerwin, with Rudolph, Ryan Susice, and Bicknell racing in the top five. Rudolph would use the inside line to take second away, but Williamson would pull way to score the victory.

Kasey Coffey and Dylan Duhow were on the front row for the Investors Service Sportsman feature, with Coffey showing the way ahead of Duhow, Derek Wagner, Dave DiPietro, and Noah Walker racing in the top five early on. Greenley George spun in turn four to bring out the race’s first caution on lap number four. Wagner would take over second from Duhow on the restart and would go after Coffey for the lead. Wagner would take over the lead on lap 11 and start to pull away from the field. Wagner would go on to score his fourth win of the season ahead of Coffey, Duhow, Walker, and Senek.

Cole Susice and Brian Melcher were on the front row for the Sunflowers of Sanborn Mini Stocks feature, with Susice showing the way ahead of Melcher, Matt Hornquist, Curtis Rung, and Ryan Plante racing in the top five. Rung would take over second and would be in hot pursuit of Susice for the lead. Ryan Plante slowed, in turn, one to bring out the caution on lap eight. Susice would survive several late restarts to pick up his first win of the season.
Abby Castile and Aden Harris were on the front row in the Kevin’s Carpet Cleaning Novice Sportsman feature, with Harris showing the way. Colby Adamczak would take second away from Castile on lap three and would go after Harris for the lead. Noah Mamo would battle with Castile and would move into third place on lap number nine. Adamczak would reel in Harris, but Harris would hold off Adamczak and Mamo to score the feature win.

After next Friday, two of the biggest shows of the season will take place as on Wednesday, August 24 is the 37th running of the Summer Nationals featuring the Super DIRTcar Series Big Block Modifieds and the Investors Service Sportsman will be featured in the second running of the Mike Bonesky Memorial. The Mike Bonesky Memorial will be a Western and Central Region combined race for the DIRTcar Sportsman. Racing on Wednesday, August 24th will begin at 7 pm. Then on Saturday, August 27, the Versus Monster Trucks will take center stage! Tickets are available for the Monster Truck show by logging on to www.ransomvillespeedway.com