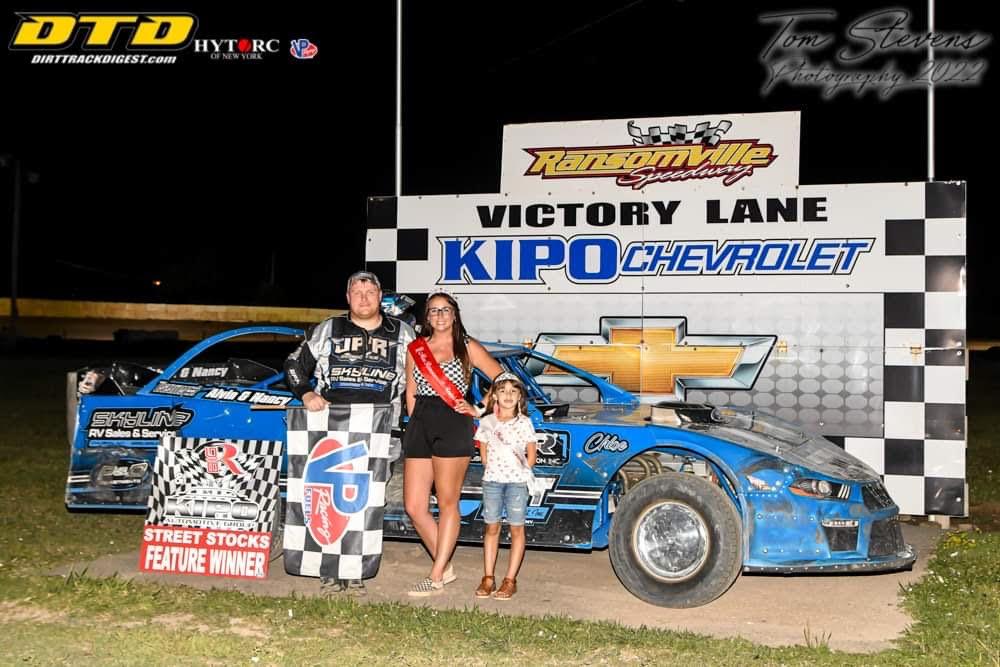 Pete Bicknell and Rick Richer shared the front row for the 30-lap Krown Undercoating Modified feature event, with Bicknell showing the way, with Erick Rudolph racing in third place ahead of Greg Martin and Mat Williamson. With Bicknell leading Richner, Rudolph and Williamson battled for third place. The lead duo would pull away from Rudolph, Williamson, and Jonathan Reid. The 2021 track champions would battle for much of the 30-lap affair, with Rudolph being able to pull away after Williamson hopped the cushion prior to the halfway mark. Greg Martin would regain the fifth position after passing Reid on the front straightaway with 10 laps remaining. Ryan Susice would take over sixth place after passing Reid on lap 23. The battle was on for second place late in the event as Rudolph and Williamson would catch Richner. Bicknell would score the win, with Rudolph finishing in second.

Derek Wagner and Brian Harris were on the front row for the Investors Service Sportsman feature, with Wagner in the lead ahead of Brett Senek. Scott Kerwin would take over third place from Harris on lap three, as the top two would start to pull away from the field. Nelson Mason would work his way into fifth place after starting 14th on the grid in just nine laps. The leaders would hit lap traffic with 10 laps remaining and that would allow Senek to reel in Wagner. Jordan Moden would hit the turn two wall to bring out the race’s first caution on lap 17. On the restart, Wagner and Senek would battle for the lead as Kerwin would regain third place from Dave DiPietro. Wagner and Senek battled for the lead, just as Nelson Mason would pass DiPietro to take over fourth place. Wagner would hold off Senek to score the win, with Mason, Kerwin, and Cam Tuttle completing the top five.

Dan Schulz and John Zimmerman brought the KiPo Motors Street Stocks to the green flag in the Mackenzie Kulesza Memorial, with Zimmerman having issues and bottlenecked the field. The initial restart would then put Dennis Cummings and Josh Pangrazio on the front row. Cummings would take off in the lead ahead of Pangrazio, with Ken Camidge, Damian Long, and Simon Bissell racing in the top five early on. Cummings’s run would end on lap seven as he got into the loose stuff in turn one and hit the wall to bring out the caution. Pangrazio would take off in the lead on the restart, with Bissell racing in second, and Pete Stefanski and Dan Schulz battling for third place. Schulz would take second away from Bissell on lap 17. On the restart, Pangrazio would once again take off in the lead, with Schulz in second place. Pangrazio would pull away from the field to earn his sixth win of the season.

Curtis Rung and Rocco Conte were on the front row for the Sunflowers of Sanborn Mini Stocks, with Conte showing the way. Brad Whiteside would take over second and would quickly go after Conte for the lead, with Rung racing in third. Bill Weller Jr would come to a stop on the back straightaway to bring out the caution on lap six. On the restart, Ryan Plante would move up to take over second place and would battle with Whiteside, as Conte started to pull away from the field. Cody Griffin would bring out the caution with two laps remaining after blowing up the motor on his number 93 ride. Whiteside would catch Conte on the restart, but Conte would hold off Whiteside to score the feature win.

Jim Forster and Colby Adamczak shared the front row for the Kevin’s Carpet Cleaning Novice Sportsman, with Adamczak showing the way. Greenley George would take over third place following a pair of early cautions and would set her sights on second place Noah Mamo. Adamczak and Mamo would pull away from the field. The caution would come out with five laps remaining, allowing Mamo to close in. George would take over second with three laps remaining. Adamczak was able to hold off Mamo and George to score the feature win.

Next Friday, July 29 will be the Dick Wilkinson Memorial for the Sunflowers of Sanborn Mini Stocks, plus Kids' rides! Niagara Metals, Jetport Restaurant, and Tim Hortons will be presenting the racing program that will also feature the Krown Undercoating Modifieds, Investors Service Sportsman, KiPo Motors Street Stocks, and the Kevin’s Carpet Cleaning Novice Sportsman. Pit gates will open at 5:00 pm with grandstands opening at 6:00 pm and racing will begin at 7:15 pm.