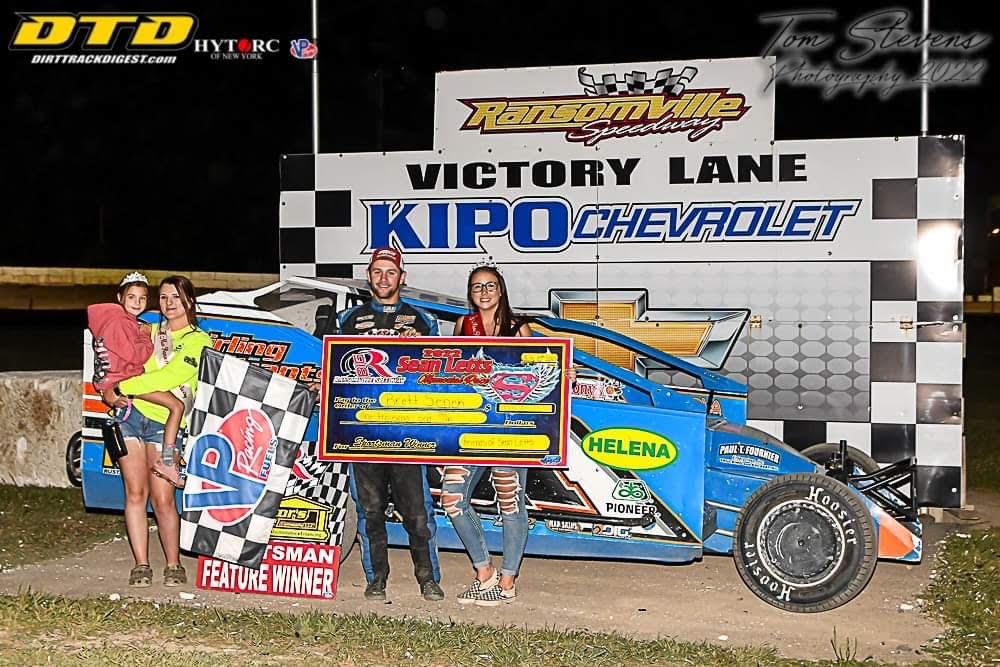 The Krown Undercoating Modifieds were led to the green flag by Greg Martin and Dave Flannigan Jr, with Martin showing the way. Mat Williamson would close in on Flannigan for second place early on. Following an early race restart, Gary Lindberg would hop the cushion and would take the Sittler Racing car to the pits. Ryan Susice would move into third place and would go after the lead duo. Williamson would look underneath Martin and the two would battle for the lead. Williamson would take over the lead on lap 11 from Martin as Martin hopped the cushion in turn one. Dave Flannigan would spin in turn two to bring out the caution with 10 laps remaining. On the restart, Ryan Susice would take second away from Martin. Williamson would pull away from the field to score his third win of the season.

Tim Nies and AJ Custodi brought the Investor’s Service Sportsman to the green flag for the Sean Letts Memorial, with Brandon Close hitting the turn one wall to bring out the caution. Under the green flag, it was Custodi showing the way over Dave DiPietro and Brett Senek. Senek would close in on DiPietro for the second position and would go after Custodi for the lead. Senek would take over the lead on lap six, as both Derek Wagner and Cody McPherson worked their way into the top five. Tim Nies and Taylor Vanderzanden got together in turn four to bring out the caution on lap eight. Derek Wagner would take over second following the restart and would go after Senek for the lead. Cody McPherson would move into third place on lap 18. Wagner would close in on Senek in the latter half of the race, but Senek would hold on to score the feature win.

Dave Dussault and Ian Paul were on the front row for the Sunflowers of Sanborn Mini Stock feature with Dussault showing the way. Ryan Plante would take second place away and would go after Dussault. Plante would take the lead away on lap four. Mike Becker’s strong run would end on the last lap as his number 7 came to a stop in turn three. Plante would go on to score the win.

Colby Adamczak and Jim Forster shared the front row for the Kevin’s Carpet Cleaning Novice Sportsman feature, with Admaczak showing the way following the single-file start. Cameron Rowlands spun, in turn, one to bring out the caution, with Luke Blose also getting collected. Jim Forster was able to take the lead away from Adamczak, with Casey Jonathan racing in third place. Colby Adamczak took the lead away after Forster suffered mechanical issues with two laps remaining. On the final lap, the duo of Adamczak and Mamo would get collected and AdenHarris was able to capitalize and was able to pick up the win.

Next Friday will be the Mackenzie Kulesza Street Stock Memorial plus a full card of racing and Autograph Night. SANY New York, Brawdy Construction, Shelby Crushed Stone, and Livingston International will be presenting the racing action. Pit gates will open at 5:00 pm with grandstands opening at 6:00 pm and racing will begin at 7:15 pm.