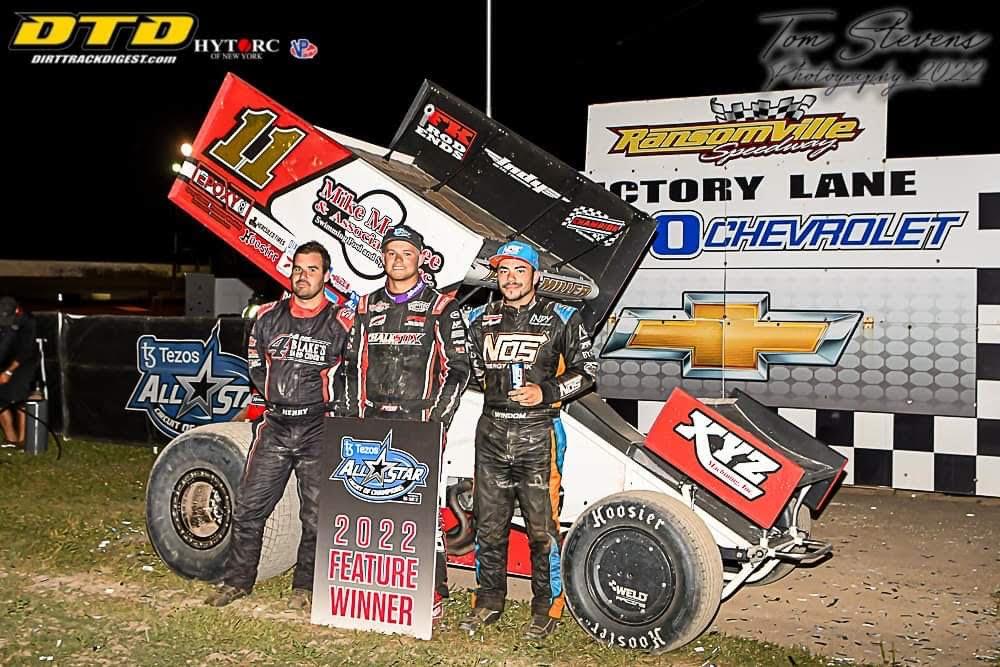 Making their first visit to Ransomville in over 20 years, the Tezos All-Star Circuit of Champions presented by Mobil 1 was brought to the green flag by Hunter Schuerenberg and Tyler Courtney, with Schuerenberg showing the way, with Courtney, Parker Price-Miller (PPM) racing in third. Justin Peck slowed on the front straightaway to bring out the caution on lap one. The restart would see the top three pull away as Chris Windom would regain third from Price-Miller. Peck would once again bring out the caution on lap three as he was suffering fuel linkage issues all night on the backup car, after flipping the primary car earlier in the night. Courtney would battle with Schuerenberg for the lead off the restart, with Schuerenberg taking control of the field. “Sunshine” Tyler Courtney would close the gap on Schuerenberg as the field entered lap traffic. As the field was racing lap traffic, the leaders would encounter Denny Peebles heading into turn one, with both drivers making contact, causing Peebles and Courtney to spin in turn one, bringing out the caution on lap 12. The restart would see Schuerenberg take the lead over Windom and Parker Price-Miller. With the leaders stringing themselves around the track, the battles would happen between two local drivers, Matt Farnham, and Paulie Colagiovanni for positions inside the top ten. After being involved in an early caution, Tyler Courtney would drive back through the field and was battling with Dylan Westbrook for 11th place with nine laps remaining. Hunter Schuerenberg was well on his way to his second career win in the Empire State, only to bring out the caution with two laps remaining, as his right rear tire exploded coming down the main straightaway. Chris Windom would take over the lead as a result, with Parker Price-Miller racing in second. The green-white-checkered restart would see PPM take over the lead with Cap Henry taking over second. PPM would go on to score the $12,000 payday over Cap Henry, Chris Windom, Bill Balog, and Zeb Wise would complete the top five. Paulie Colagiovanni was the hard charger finishing in sixth, while Tyler Courtney rebounded to finish in eighth.

Jonathan Reid and Pete Bicknell were on the front row for the Krown Undercoating Modified feature with Reid in the lead as Mat Williamson battling with Bicknell for second. The duo of Bicknell and Williamson were in tight racing, with Williamson going into the moat, and losing several spots on the track. Robbie Johnston slowed on the front straightaway to bring out the caution on lap one. During the caution, Williamson would make contact with Bicknell, sending Williamson to the tail of the field for making contact under caution. Williamson’s night would go from bad to worse early on after suffering a flat right rear tire to bring out the caution. The restart would see Reid and Bicknell showing the way with Chad Brachmann, and Ryan Susice racing inside the top four. Susice would go after Bicknell for second, as Bicknell battled with Reid for the lead. Bicknell to the lead on lap 13. Brachmann took second away on lap 20 and would go after Bicknell. Brachmann would use the outside lane to pass Bicknell for the lead with nine laps remaining and would go on to score the win, his second of the season.

Ryan Plante and Dante Mancuso were on the front row for the Sunflowers of Sanborn Mini Stock feature with Mancuso quickly jumping into the lead over Plante, with Ian Paul, Dave Dussault, and Curtis Rung racing inside the top five. With Mancuso showing the way, Brad Whiteside reeled in Plante for second before the races halfway mark, with Whiteside taking over the runner-up position. Rung would take over third with five laps remaining. Mancuso would drive away to his fourth win of the season.

Next Friday, Performance Manufacturing will present the Sean Letts Memorial for the Sportsman plus the return of the go-kart exhibition. The stars of the Little R will get a chance to run in front of the Friday night crowd as well as show their karts on display in the midway. A full card of Modifieds, Street Stocks, Mini Stocks, and Novice Sportsman will round out the program. Pit gates will open at 5:00 pm with grandstands opening at 6:00 pm and racing will begin at 7:15 pm.