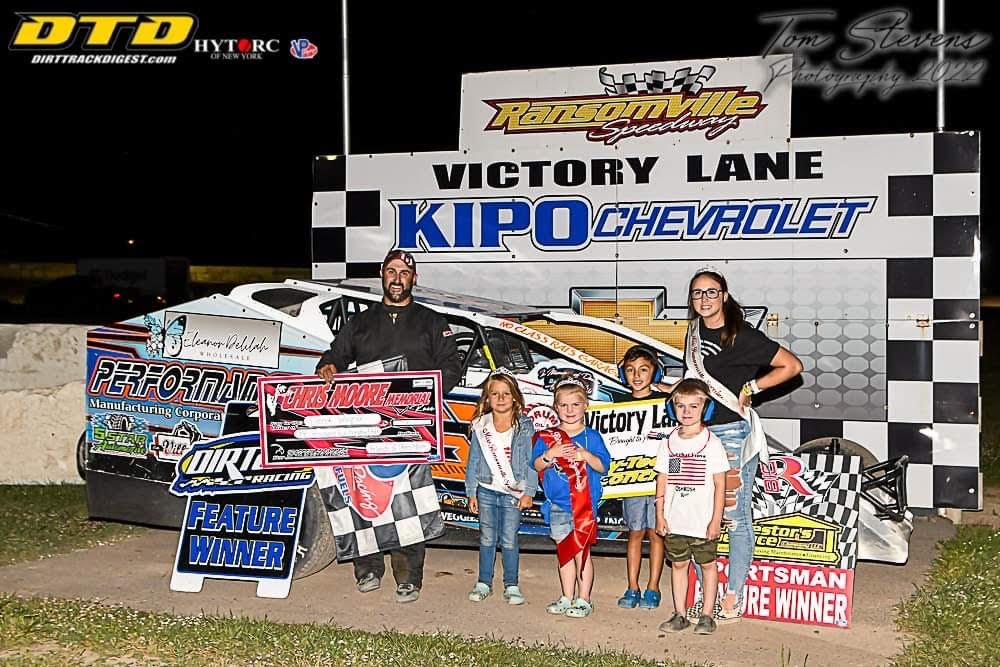 The first twin-20 for the Krown Undercoating Modifieds was led to the green flag by Mat Williamson and Chad Brachmann, with Williamson showing the way. Erick Rudolph would enter the top five early on after passing last Friday night’s winner Ryan Susice. Rudolph would then pass Richner on lap three to take over fourth, just as Brachmann would take the lead away from Williamson. Rudolph continued his march to the front after passing Greg Martin on lap eight to take over third place. Brachmann would catch lap traffic with five laps remaining, allowing Williamson to close in. The caution would come out on lap 16, as James Sweeting and Robbie Johnston got together in turn three. On the restart, Rudolph would pass Williamson to take over second going into turn three. Brachmann would hold off Rudolph to score the feature win. Chris Leone from Lewiston, NY won his second Sunflowers of Sanborn Mini Stocks feature of the season.

In the second Modified twin-20, Pete Bicknell and Ricky Richner were on the front row, with Bicknell showing the way ahead of Ryan Susice, Rick Richner, Erick Rudolph, and Jesse Cotriss. Robbie Johnston slowed on the front straightaway to bring out the caution on lap three. On the restart, Rudolph and Susice would battle for second as Bicknell started to pull away. Rudolph would take second from Susice on lap eight and would begin to go after Pete Bicknell. Rudolph would go to the outside of Bicknell to take over the lead on lap 11. Chad Brachmann hit the wall in turn four to bring out the caution on lap 14, after hopping the cushion in turn three. The restart would see Mat Williamson move into third place. Rudolph would go on to score the win, his second Ransomville win of the season.

Derek Wagner and Dave DiPietro brought the Investor’s Service Sportsman to the green flag for the inaugural Chris Moore Memorial, with Wagner showing the way over DiPietro. Off an early race restart for a stopped Brett Martin, Wagner would continue to show the way. Scott Kerwin would take over second on lap two, and Cameron Tuttle would take over third place on lap three. A four-car battle took place for fourth place as Dave DiPietro was holding off Mike Fowler, Noah Walker, and Brett Senek. The caution would come out on lap nine for a multi-car incident, in turn, one as Justin McKay, Senek, Walker, and Dylan Duhow all got together. On the restart, Wagner would regain the lead ahead of Scott Kerwin, with Tuttle, Fowler, and Cody McPherson racing in the top five. Cliff Gregg, Jessica Kriegisch, Brian Harris, and Brett Senek all got collected in turn two to bring out the caution on lap 13. The following restart would see Wagner, Kerwin, and Tuttle battling for the lead. Tuttle would take second from Kerwin just before the race’s halfway point. Wagner would continue to show the way over Tuttle and Kerwin. Wagner would go on to score the feature win. The Sportsman Super DIRTcar Series will return to Ransomville on August 24 for the Mike Bonesky Memorial, which will be a combined Western Region/Central Region event.

Josh Pangrazio and Ken Camidge set the pace in the KiPo Motors Street Stock feature, with Pangrazio into the lead, with Simon Bissell taking over second. Dan Schulz would reel in Bissell for second place, and the two would battle, as Pangrazio pulled away from the field. Pangrazio drove out to his fifth win of the season.

Jeffery Wynes and Cody Griffin were on the front row for the Sunflowers of Sanborn Mini Stock feature with fourth-place starter Chris Leone taking the lead down the back straightaway with Dave Dussault, and Ryan Plante moving into the top three on the drop of the green. Wynes would hold off challenges from Cole Susice and Brian Melcher in the opening laps. Leone would pull away from the field to score his second of the season.

Qualifying heat race winner Greenley George and Jim Forster shared the front row for the Kevin’s Carpet Cleaning Novice Sportsman feature, with Forester showing the way. Colby Adamczak would take second away from Noah Mamo. Forester continued to lead the way as Adamczak, and Mamo battled for second for several circuits. Multiple cautions plagued the 15-lap event for the entry-level division. Forster would pull away to what would have been his first career feature win, however, he was found to be illegal in post-race tech. Noah Mamo from Ridgeway, Ontario crossed the line in second place.

Next Friday, Busch Beer presents the highly anticipated return of the Tezos All-Star Circuit of Champion Sprint Cars presented by Mobil1 to the Big R! The Krown Undercoating Modifieds and the Sunflowers of Sanborn Mini Stocks will round out the racing card, which will be seen before a worldwide audience on FloRacing. Pit gates will open at 5:00 pm with grandstands opening at 6:00 pm and racing will begin at 7:15 pm.