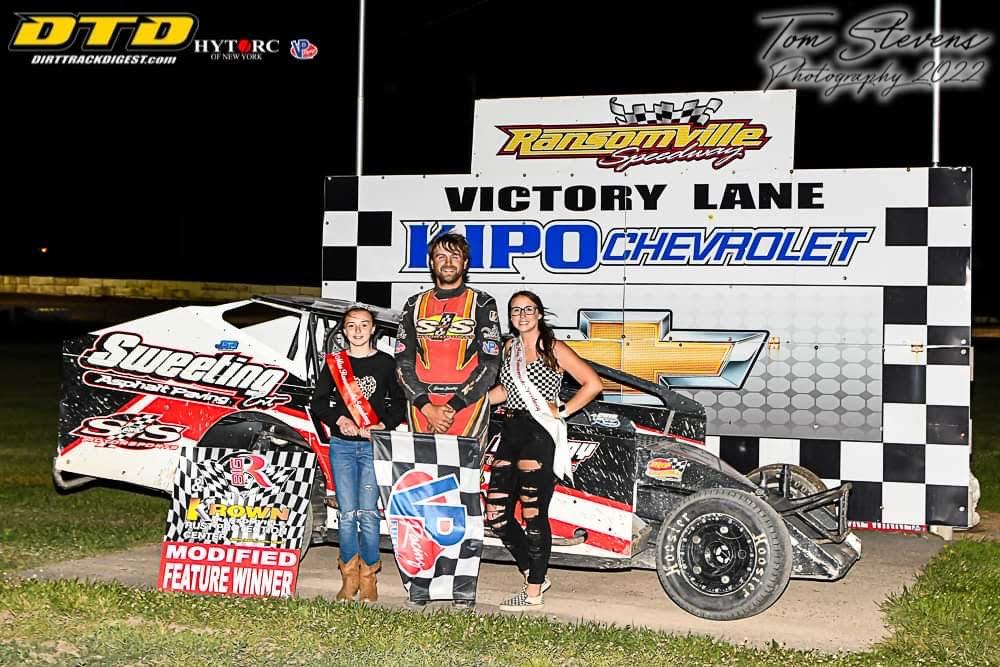 Robbie Johnston and James Sweeting were on the front row for the Krown Undercoating Modified feature with Sweeting to the lead as Ryan Susice would take second place away and Mat Williamson would race his way into third place early on. As the top three pulled away, Erick Rudolph would take fourth place away, as Mike Bowman entered the top five as well in his potent 71. Williamson and Susice battled for second throughout the event, allowing Rudolph to reel the battle and would also allow Sweeting to get away out front. Williamson would clear Susice for second on lap 23. Sweeting would go on to score the win, his first of the season.

Cameron Tuttle and Scott Kerwin brought the Investor’s Service Sportsman to the green flag with Tuttle showing the way over Kerwin with Noah Walker, Derek Wagner, and AJ Custodi racing in the top five early on. As the lead duo battled for the lead, Brett Senek entered the top five, passing Custodi on lap six. Senek would continue his pace towards the front as he would reel in Wagner for fourth place with nine laps remaining. Tuttle would hold off Kerwin’s challenges throughout the event and would drive on to score the win. Kerwin, Walker, Wagner, and Senek would complete the top five.

John Zimmerman and Ken Camidge set the pace in the KiPo Motors Street Stock feature, with Zimmerman in the lead. Josh Pangrazio would take over second, as Pete Stefanski battled with Camidge for third place. Lap six was when Pangrazio would make his move as he went to the outside to take the lead away from Zimmerman.

Jeffery Wynes and Cole Susice were on the front row for the Sunflowers of Sanborn Mini Stock feature with Susice showing the way. Dante Mancuso would quickly take over second on lap one, and by lap three would take over the race lead. Ryan Plante, Dave Dussault, and Chris Leone all racing in the top five. Susice would regain the lead on lap four, with Plante and Leone reeling in the lead duo of Susice and Mancuso. Mancuso would however use a textbook slide job to regain the lead from Susice on lap eight. Mancuso would go on to score the win, his third of the season.

Dillon Adamczak and Greenley George shared the front row for the Kevin’s Carpet Cleaning Novice Sportsman feature. Colby Adamczak showed the way ahead of Noah Mano and Greenley George. Adamczak’s lead would go away after suffering mechanical issues on his number 42 as it came to a stop in turn four to bring out the race’s first caution. Noah Mamo would inherit the lead as a result and would start to pull away from George and the balance of the field. While running second, Greenley spun in turn four to bring out the caution with five laps remaining. Mamo would go on to score his third win of the season.