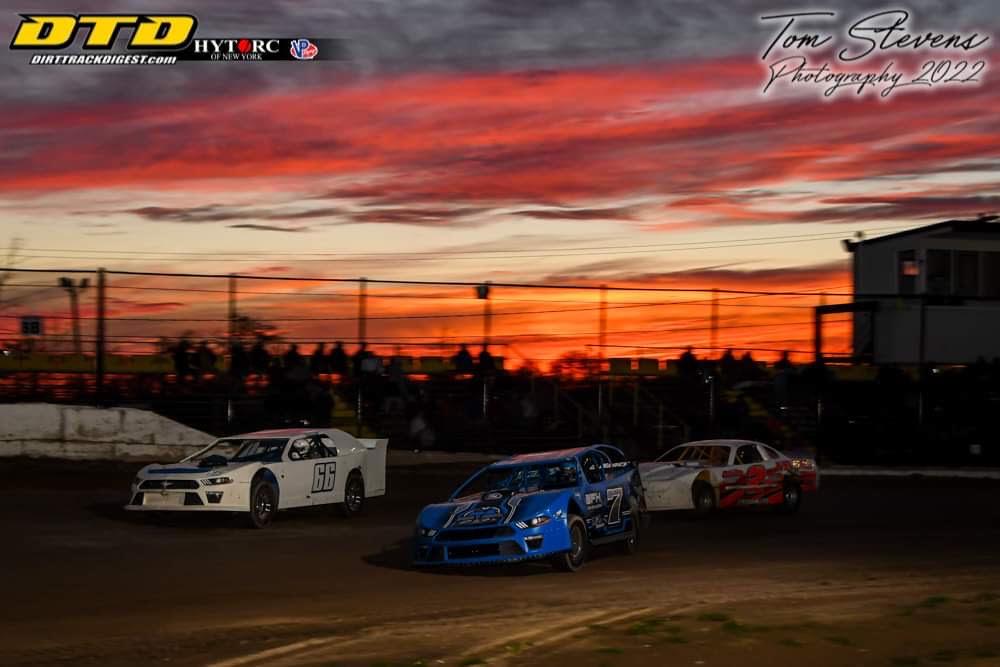 Ryan Susice and Gary Lindberg set the front row for the Krown Undercoating Modified feature with the lead duo pulling away from Chad Brachmann, James Sweeting, Erick Rudolph, and Mat Williamson. Robbie Johnston slowed on the front straightaway to bring out the race's first caution on lap six. The restart would see Williamson take off and move from 6th to fourth after passing Rudolph and Brachmann. Williamson would then pass Sweeting to move into third place. On a lap 17 restart, contact was made with the front row, resulting in Susice hitting the front stretch wall. Lindberg was sent to the rear of the field due to the contact with Susice. Then under the red flag, Lindberg drove and stopped his car at the flag stand and as he drove under red flag conditions, he was told over the one-way radio to take his car to the pits for the duration of the event. Susice was able to rejoin the field after making a pit visit. As a result, the 2021 track champions Mat Williamson and Erick Rudolph would lead the field back to the green flag. Over the remaining 13 laps, Williamson and Rudolph would pull away from the field and it would be Williamson collecting the win over Rudolph. Chad Brachmann, James Sweeting, and Mike Bowman would complete the top five.

Scott Kerwin and Brett Senek brought the Investor’s Service Sportsman to the green flag with Kerwin getting the lead over Senek, Cam Tuttle, Dylan Duhow, and Derek Wagner. Kerwin would start to pull away from the field and had over a 1.5-second advantage before the race’s first caution on lap eight as Jordan Moden suffered a flat right rear tire. Kerwin would jump back in the lead on the restart with Senek and Tuttle pulling away from Wagner, and James Friesen. Kerwin would pull away from the field to pick up the win.

Dan Schulz and Randy Zimmerman set the pace in the KiPo Motors Street Stock feature with Schulz showing the way with Josh Pangrazio quickly taking over second and beginning to reel in the race leader Schulz. Joey Zimmerman spun on lap three to bring out the caution with Simon Bissell also getting collected. The restart would see Pangrazio pull the slider to take over the lead with Pete Stefanski battling with Schulz for second. The lead duo would battle for several laps, with Schulz regaining the lead and then Pangrazio would regain the top spot. A late-race caution would bunch the field up, with Pangrazio being able to pull away to pick up the win.

Based on their qualifying results, Curtis Rung and Chris Leone were on the front row for the Sunflowers of Sanborn Mini Stock feature with Leone in the lead ahead of Cole Susice. Off a lap three restart, Leone and Susice would pull away from the field, including a battle between Dave Dussault and Brad Whiteside. Whiteside would take second from Susice and then go after Leone for the lead. Susice would pull into the pits on lap nine, surrendering the third position. Leone and Whiteside would pull away from the field, battling for the lead and the win. Leone would hold off Whiteside to score the win.

Greenley George and Noah Mamo shared the front row for the Kevin’s Carpet Cleaning Novice Sportsman feature, and it was Mamo showing the way. Colby Adamczak would take the lead away from Mamo off a lap six restart. Adamczak would go on to collect the victory to start the 2022 season.