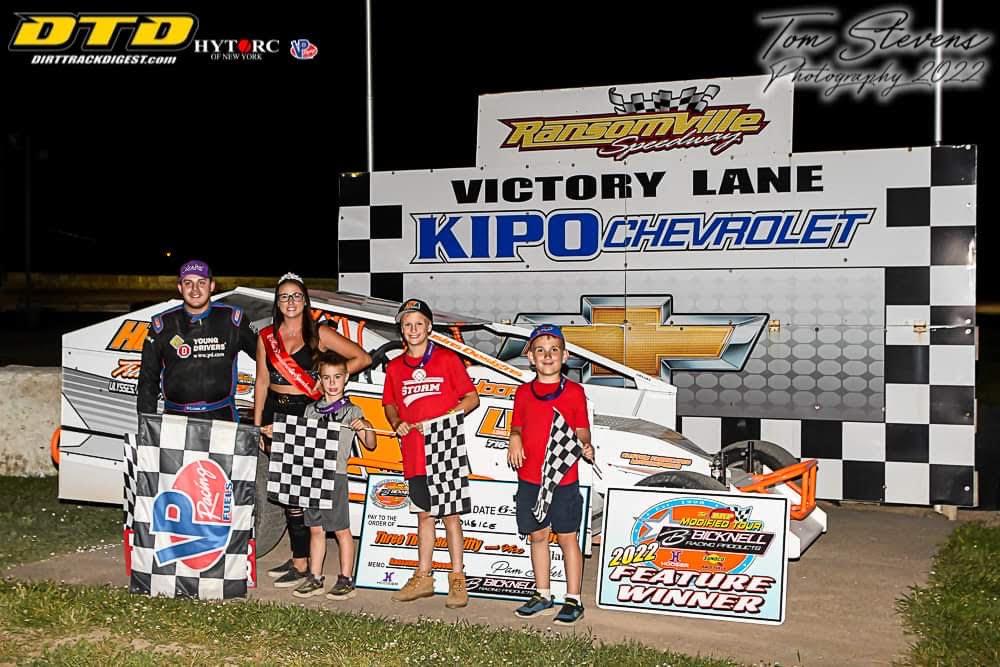 Ryan Susice and Luke Carleton were on the front row for the 35-lap BRP Modified Tour feature event, with Susice showing the way over the field. Zach Payne took over third from Dave Murdick, but Murdick would regain the position on lap two. Billy VanPelt, Gary Lindberg, and Pete Bicknell, all started to make their way through the field. Susice would hit lap traffic on lap seven, just as Gary Lindberg moved into fourth place after passing VanPelt and Payne. Mark Frankhouser spun in turn two to bring out the race's first caution on lap nine. Gary Lindberg used the restart to take second away from Carleton and would quickly go after Susice for the lead. Lindberg and Susice battled for the lead, as Pete Bicknell entered the top three after passing Carleton and Murdick. Susice would hold off Lindberg during the first half of the race, as the top three (Susice, Lindberg, Bicknell) pulled away from the field. Marshall Hurd and Ryan Ferri got together on the back straightaway to bring out the caution on lap 15. On the restart, “Mr. Small Block” Pete Bicknell would take second away from Lindberg and would go after race leader Ryan Susice. Tyler Willard would enter the top four after passing Luke Carleton on lap 22. After visiting the pits mid-race, Erick Rudolph would re-enter the top 10 on lap 24. Susice would pull away from Bicknell and Lindberg to pick up the checkered flag. It was an eventful day for Susice, as he was scheduled to drive the Slack Racing #3rs entry, but a motor let go while in the pit area forced the team to go to a backup plan. The backup plan was the Patrick Hoopes #10 entry, which proved to be the winning combination as Susice led wire-to-wire to pick up the popular victory.

Simon Bissell and Dan Schulz set the pace in the KiPo Motors Street Stock feature, with Schulz showing the way. Brandon Sherwood would take over second and Josh Pangrazio racing in third. After a pair of early race cautions, John Zimmerman entered the top three and continued to battle with Sherwood and Pangrazio. Zimmerman was off the pace and pulled into the pits on lap seven. Pangrazio would spin in turn two after contact with Bissell to bring out the caution on lap 14. On the restart, Joey Zimmerman moved into the top three and was right there behind Schulz and Sherwood. Sherwood would try to get around Schulz in the closing laps, but he would hold off Sherwood by.090 seconds and Zimmerman to score the feature win.

Ryan Plante and Brian Melcher were on the front row for the Sunflowers of Sanborn Mini Stock feature with Plante showing the way. Chuck Hughes flipped in turn two to bring out the red flag on lap two. Hughes climbed out of his racer under his own power. On the restart, Dante Mancuso would work his way through the field and would move into the top three to challenge Chris Leone for second. Mancuso would take second away on lap 10 and would go after Plante. Plante would hold off Mancuso to score the win.

Colby Adamczak and Greenley George shared the front row for the Kevin’s Carpet Cleaning Novice Sportsman feature, with Adamczak showing the way. Greenley George raced in second with Noah Mamo and Matteo Panunte racing in third and fourth, respectively. Adamczak would hold off Greenley to score his fourth victory of the season.

Next Friday, the Krown Undercoating Modifieds will headline the show with their twin 20s plus the inaugural Chris Moore Memorial for the Investors Service Sportsman, who will be competing in the Super DIRTcar Series USA Western Region event. Plus, the Ki Po Motors Street Stocks, Sunflowers of Sanborn Mini Stocks, and Kevin’s Carpet Cleaning Novice Sportsman. A gigantic fireworks show will light up the sky presented by Hy-Tech Concrete, Sunset Bar & Grill, JW Swanson, Parkhill Tree Service, and Niagara Hardwood. Pit gates will open at 5:00 pm with grandstands opening at 6:00 pm and racing will begin at 7:15 pm.