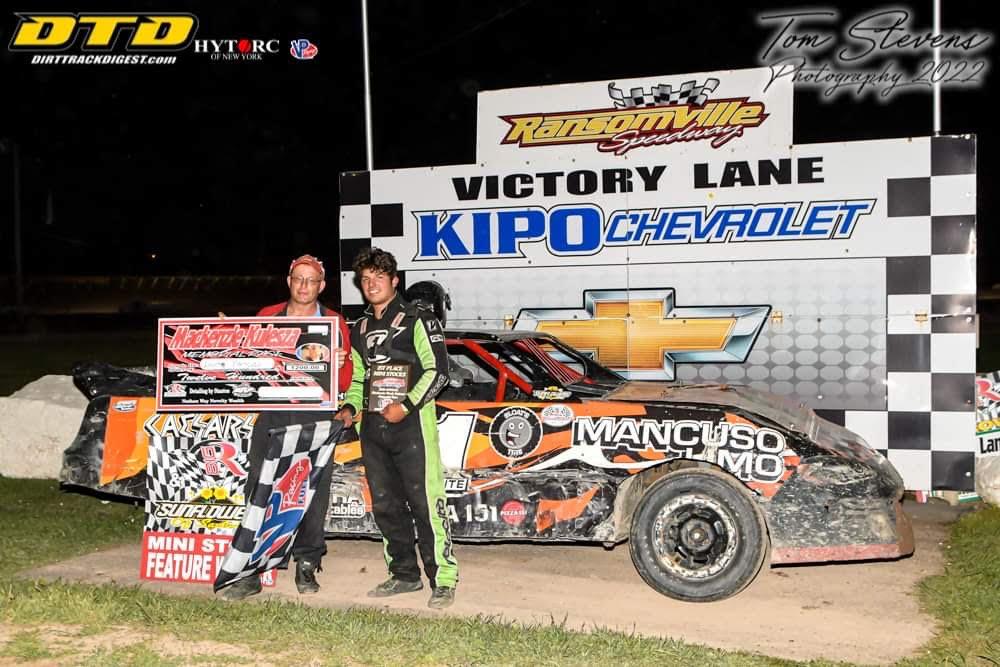 Dante Mancuso and Ryan Plante brought the Sunflowers of Sanborn Mini Stocks to the green flags in the Mackenzie Kulesza Memorial with Mancuso showing the way. Plante, Rocco Conte, Curtis Rung, and Dave Dussault racing in the top five. Bill Weller Jr entered the top five and would go after the leaders. Weller would move into second before the halfway mark and would go after Mancuso for the lead. The leaders would race through lap traffic with Mancuso leading. Weller pulled into the pits with five laps remaining, giving up second place. Mancuso would drive away from the field to pick up the victory. At 7:00 am Friday morning, Mancuso wasn’t sure if the car would be done as it was just a rolling frame at his shop. It took him and his crew the day at the shop and putting the finishing touches at the track in order for him to compete in the evening’s events.

Steve Lewis Jr and Chad Brachmann were on the front row for the Krown Undercoating Modified feature with Brachmann taking the lead with Mike Bowman quickly taking over second and began reeling in Brachmann. John Smith spun, in turn, one on lap six to bring out the race's first caution. Mat Williamson would take over second from Bowman on lap seven, with Brachmann out front. “CB3” would pull away from Williamson and Bowman. Ryan Susice would take fourth away from Lewis on lap 18. Williamson would catch Brachmann with 10 laps remaining and the battle was on for the lead. Williamson looked underneath Brachmann to take the lead with two laps remaining and would go on to score the win. Brachmann, Ryan Susice, Bowman, and Pete Bicknell would complete the top five.

Derek Wagner and Dylan Duhow brought the Investor’s Service Sportsman to the green flag with Wagner taking the lead. With Wagner out front, he opened up his lead over Duhow, with Brett Senek racing in third and was followed by Orval Harris and Scott Kerwin. Duhow and Senek would battle for second with Scott Kerwin starting to reel them in. Jordan Moden came to a stop in turn four to bring out the caution on lap 19, erasing a near six-second lead over the rest of the field. During the caution, Kerwin came to a stop on the front straightaway and needed a tow back to the pit area, giving up fourth place on the track. Wagner would pull away on the restart and he would go on to score the feature win.
Pete Stefanski and Jimmy Grant set the pace in the KiPo Motors Street Stock feature with Stefanski showing the way with Grant, Josh Pangrazio, Dan Schulz, and Ken Camidge racing inside the top five. Jimmy Grant would take the lead away on lap two. Pangrazio would take second away from Stefanski and went to work on race leader Grant. Pangrazio got tight in the late going and that would allow Grant to pull away and allow Schulz to take over second place. Grant was able to get the win over Schulz, Pangrazio, Simon Bissell, and Dennis Cummings completing the top five.

Tyler Moore and Cameron Rowlands shared the front row for the Kevin’s Carpet Cleaning Novice Sportsman feature with Moore showing the way. Rowlands would take the lead away with Colby Adamczak and Noah Mamo racing in the top three. Mamo would move into second off a lap four restart with Adamczak out front. Once out front, Adamczak pulled away to his third consecutive victory.