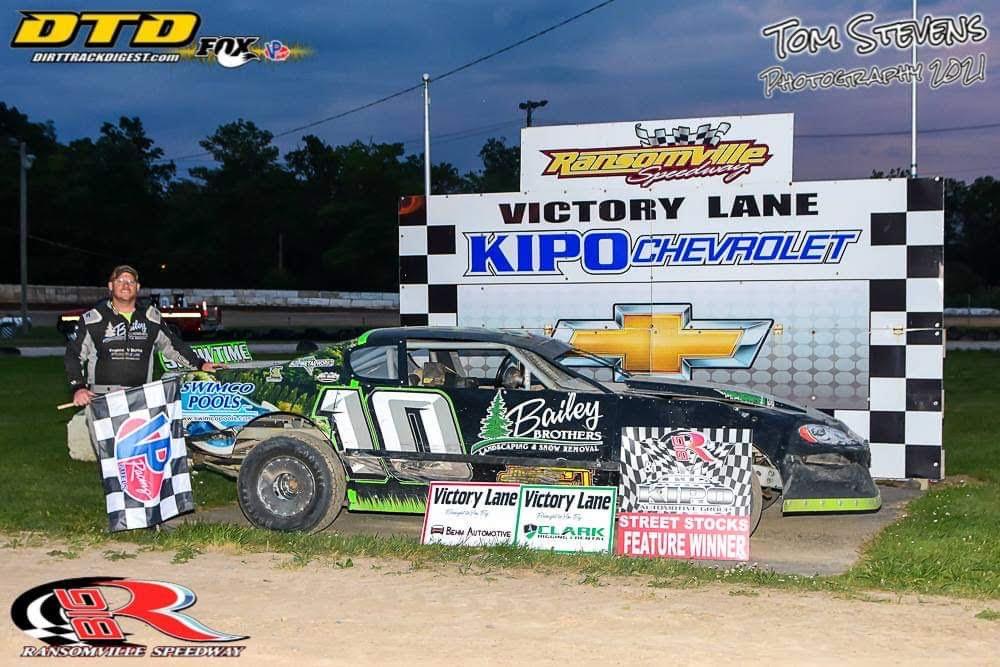 Rudolph Wins Third of 2021 While Kerwin, Israel, Mancuso, and Junkin Pick Up Their Second

“Hot Wheels” Greg Martin and “CB3” Chad Brachmann were on the front row for the 30-lap feature for the Krown Undercoating Modifieds with Martin using the outside groove to take over the lead with Erick Rudolph, Ryan Susice, and James Sweeting racing in the top five. Jonathan Reid battled with Sweeting for fifth place, just as Rudolph passed Brachmann to take over the second position. On lap five, “The Firestarter” Erick Rudolph would pass Martin to take over the lead. Brachmann and Martin would battle for second with the veteran Brachmann taking over the runner-up position on lap 10. “The Renegade” Ryan Susice would battle with shop mate Greg Martin for third place, using the inside of the speedway. Martin would hold off Susice at the race’s halfway mark, as Rudolph continued to show the way, showing a near three-second advantage over the field. Susice would finally take over the third spot on lap 19. Rudolph would go on to score his third win of the season in four starts at the “Big R”.

Cameron Tuttle and Scott Kerwin brought the Investor’s Service Sportsman to the green flag for their 25-lap feature event with Kerwin taking over the lead. Brett Martin and Dave DiPietro battled for third place in the early laps with Derek Wagner racing inside the top five, with Martin pulling away from both DiPietro and Wagner. Martin would reel in Tuttle and the two would battle for second place as Kerwin pulled away from the field. Brett Senek would battle with Wagner for fifth place at the races halfway mark. Kerwin pulled away from the field to win his second of the season.

“Showtime” Jaren Israel and Chris Dziomba set the pace in the 20-lap feature for the KiPo Motors Street Stocks, and it was Israel showing the way. Pete Stefanski would quickly take over second and then go after Israel for the lead. Anthony Guthrie, James Loveland, and Mike Kramarz raced inside the top five as race leaders Israel and Stefanski pulled away from the field. Israel would increase his lead over Stefanski as the race went on. Dziomba hit the turn two wall on lap 12 to bring out the caution. Anthony Guthrie would close in on Stefanski and Israel on the restart, with Guthrie taking over second place momentarily before Stefanski regained the position with five laps remaining. Israel and Stefanski would quickly pull away once again in the closing laps, with Israel holding off Stefanski to score the win. Israel’s win over Stefanski was 43-thousandths of a second.

Jake Bansmer and Sam Junkin were on the front row for the Kevin’s Carpet Cleaning Novice Sportsman feature with Junkin showing the way. The lead duo would pull away from the field, with Bansmer battling and closing in on Junkin for the lead. Just as Bansmer would have passed Junkin on lap 11 for the lead, Abby Castile hit the front stretch wall to bring out the event's first caution. Junkin would continue to set the pace off the restart and the duo would pull away from Jim Forster, Brandon Close, and Ken Washburn. Close spun in turn four to bring out the caution on lap 13 and Robert Henning had nowhere to go and got collected in the accident. The two-lap shootout would see Junkin hold off Bansmer to score his second win of the season. Bansmer, Forster, Washburn, and Colby Adamczyk completed the top five.

Next Friday, Triple T Towing presents the first Demolition Derby of the season. Bailey Brothers Landscaping and 87 Buff present a full card of Krown Undercoating Modifieds, Investor’s Service Sportsman, KiPo Motors Street Stocks, Sunflowers of Sanborn Mini Stocks, and Kevin’s Carpet Cleaning Novice Sportsman. Pit gates will open at 5:00 pm with grandstands opening at 6:00 pm and racing will begin at 7:15 pm. For those unable to be in attendance, the races will be streamed live on www.dirttrackdigest.tv