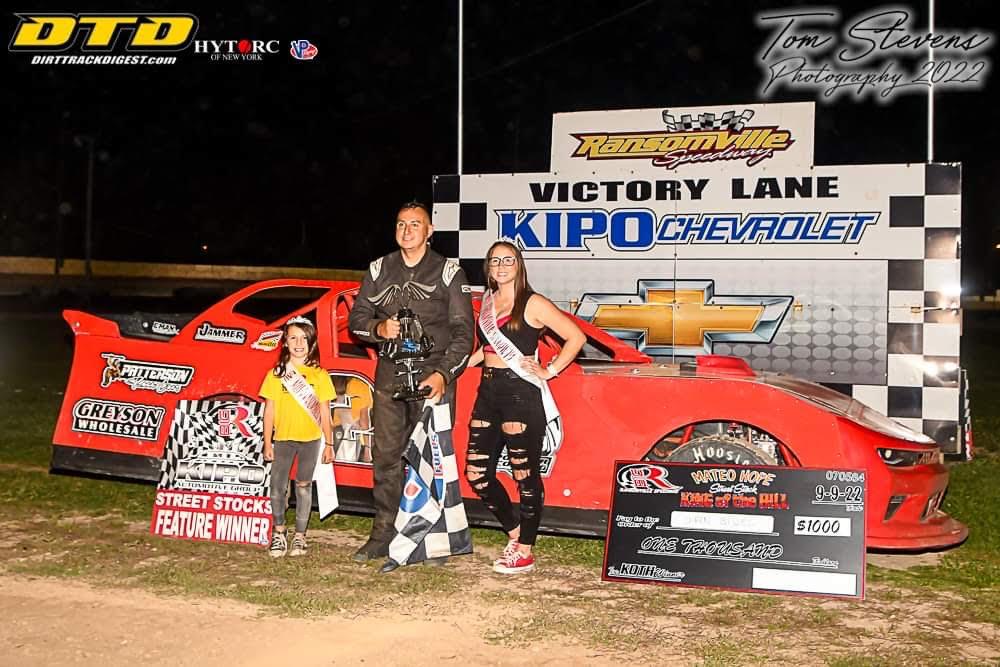 Jesse Cotriss and Chad Brachmann were on the front row Big Block/Small Block Shootout for the Krown Undercoating Modifieds, with Brachmann taking the lead at the end of lap one. Mat Williamson would take over second from Cotriss on lap three and would go after Brachmann for the lead. Ryan Susice and Garrison Krentz would go three-wide with Cotriss for third place, with Susice moving into third, with Krentz taking over fourth place. Krentz would move into third after passing Susice on lap nine. Tony Pangrazio and John Smith got together on the front straightaway to bring out the caution on lap 12. On the restart, Brachmann, Williamson, and Susice would all pull away from the field. Williamson would take the lead from Brachmann on lap 17, and Williamson wouldn’t look back, as he drove away to earn his seventh win of the season.

Brett Senek and Kyle Richner were on the front row for the Sportsman/Novice Shootout, with Senek jumping into the lead. Sam Hoxie made hard contact with the turn-one wall to bring out the opening caution. Senek would take off in the lead, with Cameron Tuttle battling with Richner for second place at the start. Luke Blose spun, in turn, four to bring out the caution on lap three. The ensuing restart would see Senek in the lead, with Tuttle, Dave DiPietro, Derek Wagner, and Richner racing in the top five. DiPietro would take second away, with Wagner moving into third place. Wagner would take over second place on lap seven, as Senek started to pull away from the field. Senek would go on to score his fourth win of the season ahead of Wagner, DiPietro, Tuttle, and Richner.

Dennis Cummings and Ken Camidge brought the field to the green flag for the Mateo Hope Street Stock King of the Hill, with Camidge showing the way. Simon Bissell would move into second and would go after Camidge for the lead. Dan Schulz would move into third place following a lap five restart. Brandon Sherwood would take over second on lap eight and would go after Bissell for the lead. Following a lap 11 restart, Bissell would lead Sherwood, Schulz, Camidge, and Damian Long. Bissell would continue to lead, but Sherwood would begin to reel him in. Over the last 10 laps, Sherwood would continue to pressure Bissell for the lead, and with seven laps remaining, would spin in turn one. He would be able to continue racing. Bissell would go on to score the win, holding off Schulz, and Sherwood.

Dave Dussault and Jeffrey Wynes were on the front row Sunflowers of Sanborn Mini Stocks season championship event, with Dussault showing the way ahead of Ryan Plante. Cole Susice would move into third place, as Matt Hornquist battled for the top three. Ryan Plante would take the lead away late and he would go on to score the win, his third of the season.

Drivers went through the fans with a “pass the helmet” for suicide awareness with over $1,400 being collected.

That will conclude racing for 2022 at Ransomville Speedway. The next event on the schedule is the end-of-the-season awards banquet, set for December 3, 2022, at the Lewiston 2 Fire Hall. Information regarding the banquet will be released in the coming days and will be posted on www.ransomvillespeedway.com